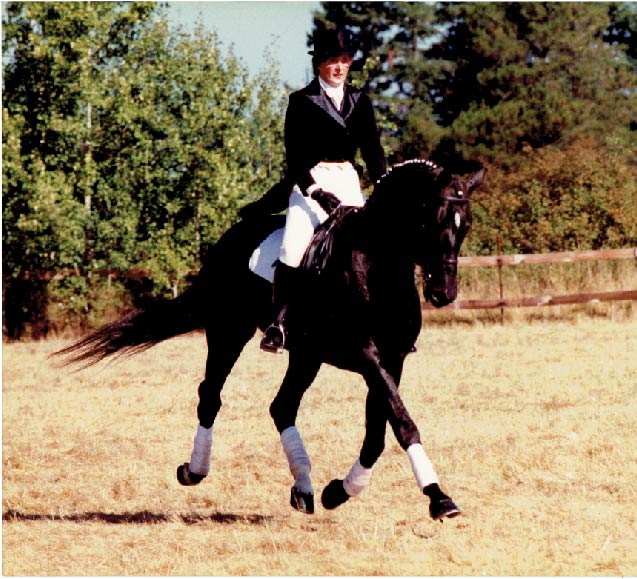 Growing up in the dry horse country of British Columbia’s Okanagan Valley, Kathy began her life with horses at a young age riding quiet and well trained trail horses. She took every opportunity to ride, quickly gaining experience and showing a genuine talent and aptitude. It wasn’t long before she found work as a guide, introducing others to the pleasures of trail riding. A few years later, Kathy and her family moved to Princeton, BC, where she rode borrowed ranch horses in the pastures, on trails, and for long days into the mountains. She also got her first taste of competition, participating in gymkhanas and getting involved in the exciting and challenging sport of barrel racing. She became well known to the local ranchers, and frequently helped start and train horses for them.

Following high school, Kathy moved to Edmonton, where she sought out an equestrian facility and began taking instruction in hunter, dressage and western disciplines. Initially, she intended riding to simply be a leisure activity. Progressing rapidly in her lessons and achieving early successes, Kathy grew increasingly aware of her natural abilities. When she was presented with an offer to be a working student, she seized the opportunity and began both living and working at the barn.

In her new capacity, Kathy taught beginner riders, started young horses and retrained problem horses. She also began serious competitive work, showing in hunter and dressage, along with western pleasure and trail classes.  Fully immersed and feeling completely at home in the world of horses, Kathy resolved to make them her life’s work.

Having had her fill of the harsh Alberta winters, Kathy moved to Victoria with a firm commitment to start her own riding school.  It took a few years of hard work and determination to become known and develop a reputation in the local equestrian community but she was ultimately rewarded with a thriving operation that included boarding, teaching students on school horses as well as on their own horses, breeding, raising and training of warmbloods, and employing working students and apprentice instructors.  With up to 30 horses in her care, and numerous staff, this was a significant and demanding business to operate.

At the same time, Kathy continued to train and advance through the dressage ranks, and eventually needed to acquire a horse to match her abilities. With great confidence, she invested in a proven Trakehner stallion named Blitzwind, and with him showed successfully at FEI levels of dressage competition. After Blitzwind retired at the age of 20 she purchased the Trakehner stallion Morgenstern on whom she continued her dressage career.

Seeking a change of pace, Kathy sold her school and for the next several years taught riding at various barns in the Victoria area. In 2008, she established Harrison School of Horsemanship at Shannick Farm in North Saanich. Always seeking new challenges, Kathy became interested in miniature horses, and learned to drive after purchasing a miniature gelding in 2006. She enjoyed this new pursuit so much that she acquired two additional minis and began offering driving lessons.

With over 40 years of experience, and having met every conceivable challenge that teaching riding can present, Kathy is among the most highly respected instructors in the area.  She pays careful attention to the capability and potential of each student, and tailors each program to suit the individual and give them the best chance of success.